June 07, 2022
It may have been an inevitability but the truth of experiencing it was no less upsetting — our family caught COVID back in April, a punishing trial affecting each of us differently. For me it ramped from a mild cough to a day of chills and aches, unable to function outside of the barest of essentials; a week later it had exited my system, a brief but fearsome storm. During my downtime, confined to my bed, I managed to catch up on Game of Thrones, the ending for which I had never seen, and had managed to avoid spoiling. How it came to mind I don’t recall for I had all but forgotten it after Sora’s birth/the pandemic’s rise; certainly I found it engaging enough to finish, even after all this time. I still find its extreme physical and sexual violence difficult to sit through. And speaking of difficult to sit through, how has Ontario decided to re-elect Doug Ford. How. True, the alternatives were not particularly palatable — Del Duca? And Horwath? What a woeful state of affairs! It seems
Post a Comment
Read more

March 03, 2022
I absolutely hate how the world is shaping up, just a frog boiling slowly in greed, misinformation, and lack of critical thought. I don't think I've said it here but as a former member, the skeptic movement has been an abysmal failure, handcuffed by the notion that one can think and live purely on logic like some alien creature, free of "human" feeling. How absolutely frustrating it is to have the right answers but not willing to use one's voice. I frankly pity and loathe them. I wrote the above back in February, when the "Freedom Convoy" was honking its way into everyone's ears, eating up media time and darling to anti-mandate-minded small business owners. And now it's March and Putin has decided to start a land war with Ukraine, threatening nukes and all, hundreds already dead, fascists looking to see how to fill in the power gaps. For once America's wolf was real, though it seems not of the mind to really do anything about it outside of sa
Post a Comment
Read more 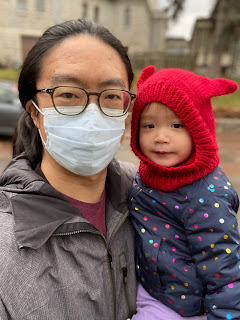 2022. Fun to say and hard to believe. The pandemic continues as Omicron crashes across the country. Sora's daycare had an outbreak over the holidays so we've extended our stay at my parent's home. Though it's not our childhood house, it contains enough relics to cast a haze of memories over me whenever I'm here. Hwan and Sora 2021 has passed, one day melting into the next. We've so far managed to avoid catching any of the 'rona, though to be sure we've had more than our share of colds and flus as Sora builds up her resistances through the daycare. It has kept our fall months especially busy, with barely time to recreate. We did manage a trip in August to Saskatoon to see MJ's family, bathing ourselves in the dry prairie heat. Despite the stress of pandemic travel and it being our first flight with Sora the trip went without incident. I watched a fair bit of Netflix last year, and maybe I'll review in another post. In terms of video games, not muc
Post a Comment
Read more

April 03, 2021
In the early days of the pandemic, before the quarantine took hold, I ordered a pair of wireless earbuds, “Klipsch T5 True Wireless Headphones”, reasoning that since I liked their wired headsets the wireless ones must be decent too. Well, after a year of use I will say that the audio quality is good but overall this was a very disappointing purchase: The buds are hilariously large, and while they do fit in my ears they stick out like Frankenstein’s bolts, and snag when I remove a mask or change my shirt etc. Despite their size, they only have one button per bud, and this button is placed so that it’s frustratingly easy to accidentally play or pause by mistake. The buds have these intense blue LEDs that you cannot configure in any way. Particularly annoying since I primarily use them at night while everyone else is asleep, but it’s also not great when I’m out and about, blinding passing strangers. But my number one beef with them is that they are constantly losing their connection to my
Post a Comment
Read more

The Outer Worlds is awful, we are boned

October 26, 2020
I rather thought the Outer Worlds to be absolute shit, and am bemused by how little people who review it seem to care that it's such a terrible game. I had expected a fun Fallout-esque romp in space but the experience felt empty, the characters completely charmless, the environments tiny and unimaginative, the action bland and forgettable. Truly, a game built by many committees and little love.   I felt much the same about Far Cry: New Dawn, but at least the maps and places were memorable and the characters have defining features that made you interested in what they had to say. My main beef was that the plot didn't make sense. That, and the awful A.I. Is having smart scripted enemies just too much to ask? Did we peak with Half-Life 2? Why do combatants have to shout their intentions and actions?  Well, that's what you get when you don't update your blog in a while -- outdated video game opinions. How am I doing? Uhm, we're still under quarantine so that's still
Post a Comment
Read more

September 19, 2020
This year is certainly moving at a brisk pace -- a US drone strike against Iraq, Bernie Sanders gaining steam in the Democratic primaries, COVID-19 and quarantines, Bernie suspending his campaign, an economic recession, a global backlash against police violence, second waves of infection and now the grumblings of the US election. I do hope that we see some lasting change, some momentum towards improving people's safety and inequality in general. This would be contingent on organizing the tangible fervor, lest it fizzle with exhaustion and ineffectual half-measures. On the one hand, the reaction to COVID has been a rather sad display of the lack of trust in science and epidemiologists, of the speed at which conspiracies flourish, and the partisanship of public health recommendations ( a known phenomenon ). On the other hand, as a whole we have been successful in participating in the largest voluntary health action in history, a cooperative activity that has likely saved millions of
Post a Comment
Read more

June 20, 2020
Ontario has begun phasing the opening of businesses, and certainly it seems like people are going back out there in search of the new normal. Combined with the lack of contact tracing, I think we can expect a second wave of cases and deaths in a couple weeks. I've read that the modest drop in the rate of new cases can be attributed to institutions - their wave has passed but the broader public's still going up . Not much new to report from our household as I continue my parental leave/quarantine. The ants are back. Our bird-feeder is very popular and I've seen some cardinals and rose-breasted grosbeaks. Sora is basically crawling, and her first two teeth are peeking out. My health is coasting along -- not great, not terrible, some nights better than others. Quality sleep still manages to escape me, there being so much to do all the time. I have been getting a fair bit of reading done, mostly fiction. The Golden Compass/The Subtle Knife/The Amber Spyglass by Philip Pullman.
2 comments
Read more
More posts