Huh, I saw another person reading one of the Belgariad books today, this time on the 504 streetcar. Seeing it really brought to mind how I loved that series, way way back when. Right now I'm actually reading The Fellowship of The Ring again, though I can't recall when I previously read it. No wait, I know exactly when it was -- when I was brushing up for the Peter Jackson movies! Oh me.

I've been fiddling a bit with the Luxury hwan.com theme. Unfortunately it makes this page look ugly if you don't have ClearType (or the equivalent) running on your machine. If it's too awful please let me know and I'll change it back or something.

I did a whole slew of sit-ups on my carpet and now I have a blister on my tailbone. Seriously, what is up with that??
at February 24, 2009 No comments:

Email ThisBlogThis!Share to TwitterShare to FacebookShare to Pinterest
Labels: hwan.com

Enjoying the Oscars, not Slumdog

I rather enjoyed that Oscars. Hugh Jackman, kudos to you, sir. Loved the intro song and dance routine. Kudos to Steve Martin and Tiny Fey, Ben Stiller. The reality television reviews before each actor award, hmmm, not sure about those. I liked it when the person giving the speech added their own personal touch to what sounded otherwise like a very robotic speech. OH big kudos to that little bit James Franco and Seth Rogen did, ha, that made me laugh. Also: domo arigato, mr roboto.

So Slumdog Millionaire was the big winner, eh? I guessed as much after that musical number they did but for a while I thought it was going to be a race between Milk and The Curious Case of Benjamin Button. I recently saw Slumdog Millionaire (as well as The Wrestler and Kung Fu Panda), and well... I would be hesitant to call it the Best Picture. It was entertaining, certainly, but it had a few things that didn't sit well me. Mostly I didn't think Dev Patel was very good -- wooden, bland, simple. Sorry guy!
at February 23, 2009 No comments:

Email ThisBlogThis!Share to TwitterShare to FacebookShare to Pinterest
Labels: Slumdog Millionaire, The Oscars

webjos of the world, unite

Howdy. Winter still here, but a crack is there, letting light through.

After that Twestival shindig, I kind of got pulled into that meta-status world of Twitter, Blip.fm, and Tumblr. Contrasting Twitter and Facebook is an interesting exercise. I mean, Twitter is more about listening in on other people's thoughts while Facebook is this claustrophobic high school with kids showing off their latest works to each other, gossipy, glossy. To the internet, everyone! Let's all soak up that brilliant glow, those heavenly emissions. See what I see and despair! Or just take note of this mundane detail I've decided to fill the dead air with, it's just me wanting to get some attention from anyone Facebook decides should hear. Toronto! Snap out of it! Facebook isn't free -- you're spending your life reading notifications, one page refresh at a time.

I didn't mean for this to turn into a rant but I guess it kind of did. Me, a dinosaur of the blog/webjo age, already on my way out, dysfunctional, of little consequence. Justin said to publish yourself, and now we swim in a murky fog of people spewing out everything about themselves, so many signals shouting over one another so that they are all noise. It's spam in a non-commercial personal form. It's everyone pretending to pay attention to everyone else. It's writing tiny speeches that live for about 3 seconds. Why send an e-mail when you can write a bland, commitment-free message to no-one?

Well, here come the trivials. Uhm.... actually, can't think of any that I really want to write about. Routine is much the same. I joined a bicycle maintenance course for April/May with a friend. Ah crap, my school's symposium is during that time. Waiting for my passport renewal to get processed. Applied to volunteer at a kid's camp. Am catching up on Flight of the Conchords, 30 Rock, and The Office. Saw that Chocolate film by the Ong Bak dude and it was slightly too silly to be enjoyable.
at February 20, 2009 No comments: 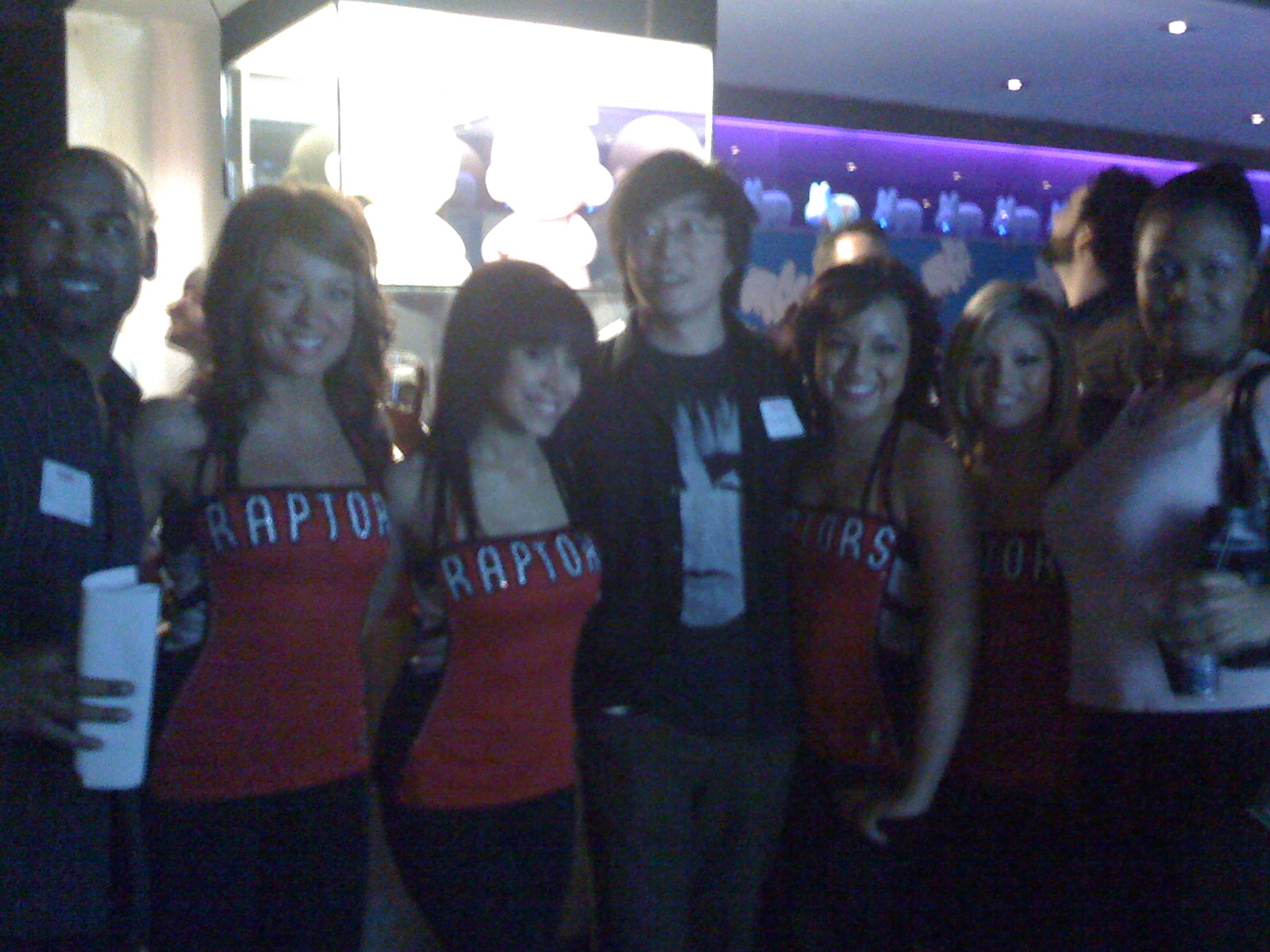 Last night I went to TwestivalTO held at Circa, a club where the old SegaCity used to be. I found out about the event mostly through boredom i.e. I was restless and used Facebook to find out what was going on in Toronto. I wasn't quite sure what to expect. I envisioned a bunch of young male nerds with smartphones drinking domestic beers, crowding around the few women and/or texting/twittering constantly.  My assumption proved quite lacking regarding the male/female ratio but the incessant smartphone use was spot on. I also didn't expect to meet the Raptor ladies or to get on CityTV (their news site, anyway -- I'm not sure if the snippet was actually broadcast). Er, don't get too excited about that video link, as I don't actually say anything. Yes, immortalized holding my iPhone and a Jamesons.

All in all a memorable night, considering my reservations 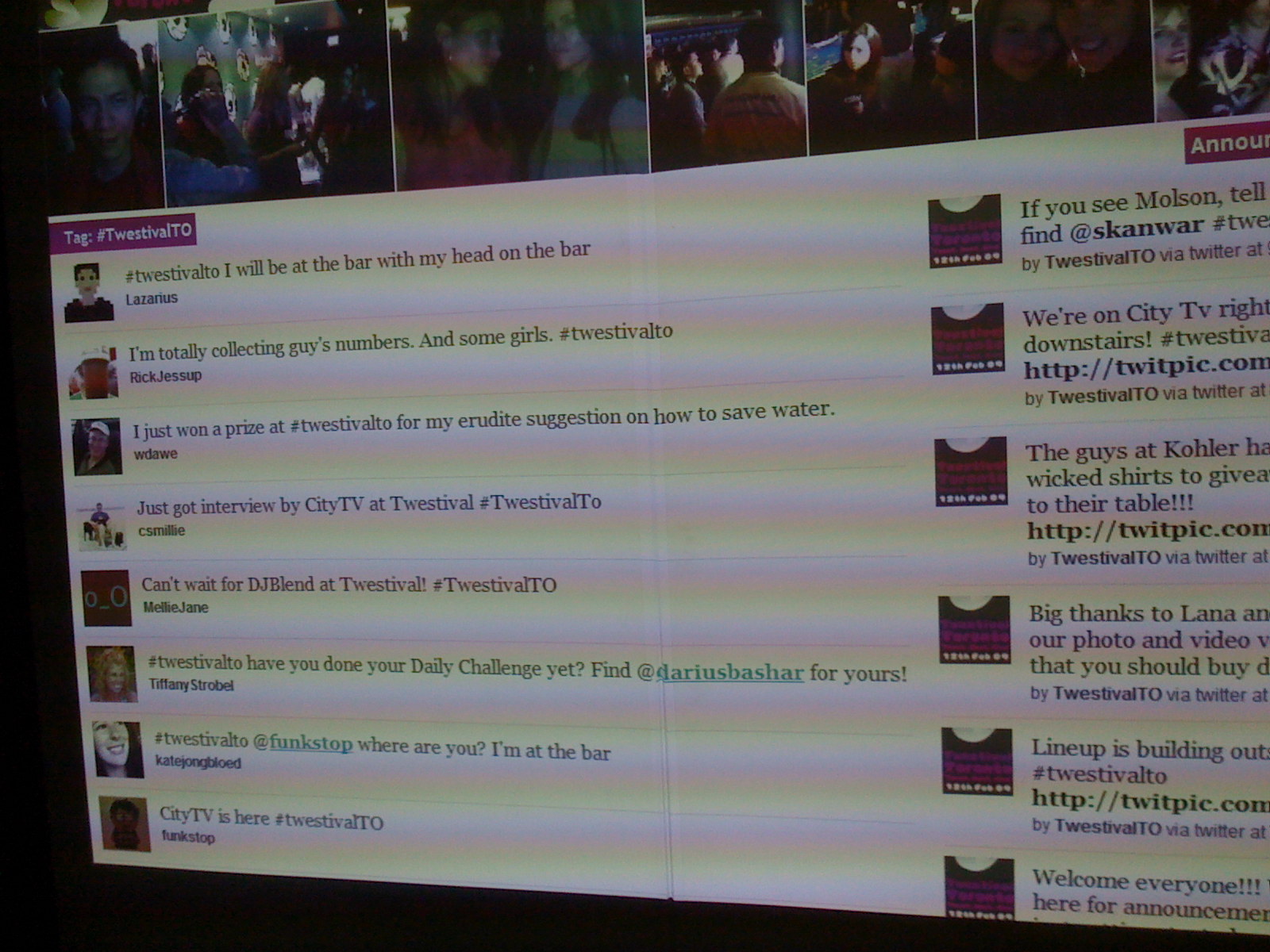 about attending a Facebook event. I do still have concerns over how much good for the charity (if indeed "charity : water" is a charity) these events actually do, especially considering the meagre amounts raised. Still, I suppose a little awareness and money for a probable good cause is a probable good thing.

an entry of little note(s)

Oh hey, ok, someone finally explained the "base metaphor" for dating in convenient image form: Base System. I remember mentioning my confusion about the system (but am unable to find the entry now), with only a homerun making any real sense. Seems I'm not the only one. Oh American sports and your zany wordplay!

Weather's warmed up somewhat eh? I took advantage of the fair air to work off a hangover Saturday afternoon by taking a run through High Park. Dear it was tough, arduous work! So very out of shape and now so very sore, mostly on my thighs. Haven't gotten the bicycle out, maybe will do later this week.

Oh hey I watch The Transporter for the first time yesterday. Was it yesterday? Yes. And while I enjoyed I also laughed at how incredibly silly it was. It just plain does not make any sense, none at all.

Picked up some new music, Sigur Ros and MGMT. Well, new to me anyways.
at February 09, 2009 No comments: