Pause if it whim

Pacific Rim sucked. It blew hard chunks of stinky fetid space cheese. I admit that it was loud and brash and visually a spectacle to behold.. but the characters were boring, the plot didn't make sense and the fights were just plain silly.

The good: I enjoyed the rendering of the futuristic shiny robots; they felt like giant machines, with incredible heft and weight behind every stomp. The aliens, the "Kaiju", were pretty cool too, harking to Godzilla-esque monsters. I liked the banter between the two scientists, who, along with the black market dealer, were the only creatures that displayed any life in the film.

The bad: I didn't care for the main character. I didn't feel the love story, or much of his sense of loss over his brother. It's fairly safe to say that the characters were about as one-dimensional as a Saturday morning cartoon, which perhaps is what they were going after but that doesn't excuse them -- they geared the movie towards the adults, they better be able to handle adults thinking about it. I didn't mind the "neuro handshake" the two pilots had to make to drive the Jaegers (though the film's explanation of the science was laughable), but wish they had used that to drive the character development. A lost opportunity, really.

The ugly: Now the plot... oh God the plot! Ugh, why do they bother saying that the Kaiju killed the dinosaurs? Why do the Jaegers fight with kicks and punches when they have swords? Or not even swords: Missiles and beams and HELLO nuclear weapons?? Why would the aliens send their forces piecemeal, in weakest-to-strongest order? How in the world would the Kaiju fly? Are there really only 8 helicopters carrying that Jaeger? Why would the earth's governing forces decide building a wall would in any way be good enough to stop the Kaiju? Why would a genetically engineered monster, brewed up in some kind of monster lab, become pregnant? Why would the pilot have to shout instructions to each other when they're linked mentally to each other? ARGH so many things that distract from the lovely mecha!

I was particularly annoyed with the EMP pulse not knocking out the "analog" Gipsy Danger. Urk. And of course, if the aliens could build such a creature, why not do it earlier?!

Sigh. Well, here's a little graph I made to give an idea of my ratings of some of the films I've seen recently: Red are action/adventure, green is comedy, blue is drama/documentary. 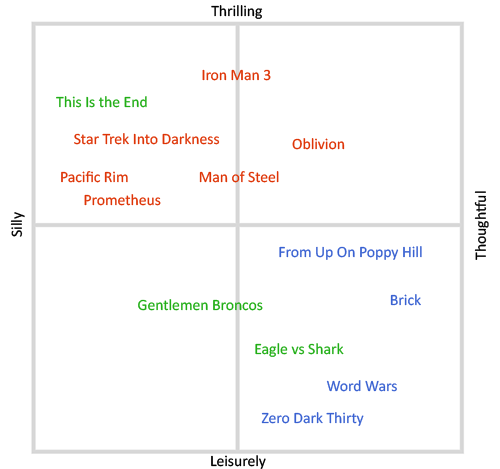 (I also recently saw Elysium -- it would sit just to the right of Oblivion.)

So yeah: Pacific Rim was silly enough to keep taking me out of the film, which otherwise featured a good opening, a long and boring middle, and just so many baffling questions by the end.
at August 22, 2013 No comments: