I blame my tumblr.com page for the lack of updates. And Twitter. And FaceBook, though to a much lesser extent. Those are good places to check up on my "What's my mood?"-type updates. I've been meaning to add a link to my tumblr here. But obviously I'm too lazy to do it, though writing about it is no problem for me.

So that jury duty thing didn't turn out to be much of anything as we were dismissed early, there apparently being no need for us that week. I did a lot of sitting around trying to do work on a WiFi connection and, as such, not getting a whole lot done. The experience is very much like waiting for your flight at the airport, after you've passed customs -- you can't go anywhere, you're stuck in a big room with a bunch of strangers, and you're all waiting for your number to be called. I didn't really meet anyone there, but it was refreshing to be reminded of who exactly makes up the populace of Toronto: the frump, the disheveled, the ordinary. Groups and lines were quickly drawn -- a bunch of comic nerds at one table, a group of old ladies at the front, a quartet of mothers over there, etc. There weren't enough tables to make it a valid social experiment but the potential for data is there.

Friday night I was at Prohibition for drinks, including a few rounds of happy hour. Chatted with an off-duty RCMP officer. Saturday morning was a dental appointment where I found out that my teeth are getting a lot more sensitive. Made some Korean dumplings with my parents then taking a nap before going to mediaman's place. Had an awesome pasta dinner. Was late for someone's birthday party. Sunday I chilled around the city, though today has been MUCH the chillier. Seriously March, what's your problem??
at March 30, 2009 No comments:

I was catching up on my 30 Rock viewing the other day and Liz Lemon said something to the effect of "...It used be that you only had to wait for a phone call. Now guys can ignore you with so many different devices..." e.g. Facebook, myspace, twitter, MSN. That insight struck a chord with me -- there really ARE so many ways to not meet people, to not talk to friends, to not communicate. Or perhaps micro-communicate, batch communicate. Microbatch communication? Publishing thoughts, 140 characters at a time. I feel a bit stretched thin.

Jury duty, indeed. Just the selection part mind you. They sit you in this big room with around 200 other people, waiting for your section to be called. I spent the first day fiddling with the laptop work lent me so that I could still be productive, though Remote Desktopping on One Zone high speed internet is an exercise in time travel, the bad kind where things sometimes take a while to catch up to where you are. I will be going to the courthouse for the rest of this week.

Watchmen and another flat tire

Wow, I'm taken aback by the vitriol that many critics are throwing at Watchmen, notably those on Rottentomatoes. Seriously, 43% on the tomatometer? Ouch. I enjoyed the film enough that I picked up a copy of the comic, something I'd always wanted to own but just never really had enough interest or reason to do so. I found it for half price, this latest reprint (the 22nd?) likely causing Alan Moore to spin in his grave, poor fellow. Still, from where does all this hate for the movie come from? I admit that it's not everyone's cup of tea but it's easily more entertaining than 90% of the junk out there. I don't watch that junk but I'm certain of the validity of my statement.

Bicycle season! And with it comes.. flat tires. My ride home from Koreatown somehow earned me a flat tire. I went to buy some wrenches today, but I got the wrong size. Perhaps the time to replace the tread is nigh.

I got sick on the weekend, some kind of flu-like thing that kept my energy levels way down. So low did I feel, depressing, morbid thoughts swimming about my head as I tossed and turned, unable to rest peacefully. All better now, thankfully yes. Now if only March would get back on track towards warmer days and nights.

Unwilling to venture outside I finally got around to installing and playing Mass Effect, BioWare's action RPG from 2007 and it is good. It reminds me strongly of Knights of the Old Republic which isn't that surprising -- why change a winning formula? Planets to explore, lots of crazy races and creatures, fun combat and easy inventory system, plenty of character dialog and development and NPC banter. A fair bit of walking in this one too, but I don't mind it all that much. I've only played about 10 hours or so worth and so far everything I've seen has been pretty delicious. The planet surveying brings to mind Star Control 2, what with the resource searching and such.

And speaking of seeing delicious things, I saw Watchmen and I REALLY liked it. It just may be the most awesome funtastic film of the year. Certainly the possibility is there. Smart adult action film, very true to the source material. Some may say too true, true to a fault perhaps but for me it was a joy to experience the material in movie form. The more I think about the film the more I smile. I liked it a lot and would see it again, easily.

reading on my iPhone, anticipating the Watchmen movie

I am trying that Indigo shortcovers.com iPhone app and, while I do enjoy the actual reading of books on my phone, the software could really use some work. My biggest beef is that it connects to the server if you haven't opened the application for a while, even though all you want to do is continue with the page that was already downloaded. Which is itself another issue -- the app seems to only download a chapter at a time. Is it so hard to load pages in the background so that I never have to face a loading screen? The interface while reading manages to annoy me by taking up valuable real estate with an unnecessary menu bar at the top and bottom (guys, it's a touch-screen device; I don't need back and forward buttons). A Kindle-killer I think not. It especially doesn't help that the search engine for titles is dastardly poor.

Oh hey, yeah, The Watchmen this weekend. Not sure how I feel about it. I mean, I entirely expect the plot to be mangled and perhaps stripped of its beauty but I do plan on seeing the movie. I am concerned that they're turning it into a full-on action film, which I'd never really thought the graphic novel to be. I enjoyed 300 though so who knows? Hopefully it'll be better than the V for Vendetta adaptation. Although, to be fair, that was no easy task to take on.
at March 05, 2009 No comments:

it's cold outside, a new view at work

Curse this weather! Until the day I howl for a cooler time I find these -24 windchills quite upsetting. Thankfully today is the last day for this zaniness, at least for the foreseeable, forecastable next few days. The cold troubled me yesterday during a workout, my ankles locking up as I stretched. It could just be the old in the them but I'm going to blame the chilly walk from St. Clair to Eglinton. St. Clair being where I participated in a group interview to volunteer for a camp counsellor position, something I kind of rashly (after much goading) decided to try for. I enjoyed myself enough, though I do wonder if my quiet (i.e. shy and introverted) nature appealed to the interviewers any. That reminds me, I need to look up what it'll take to get my Bronze Cross recertified. Hmm, it's changed since I took it. Which admittedly was back 1993. 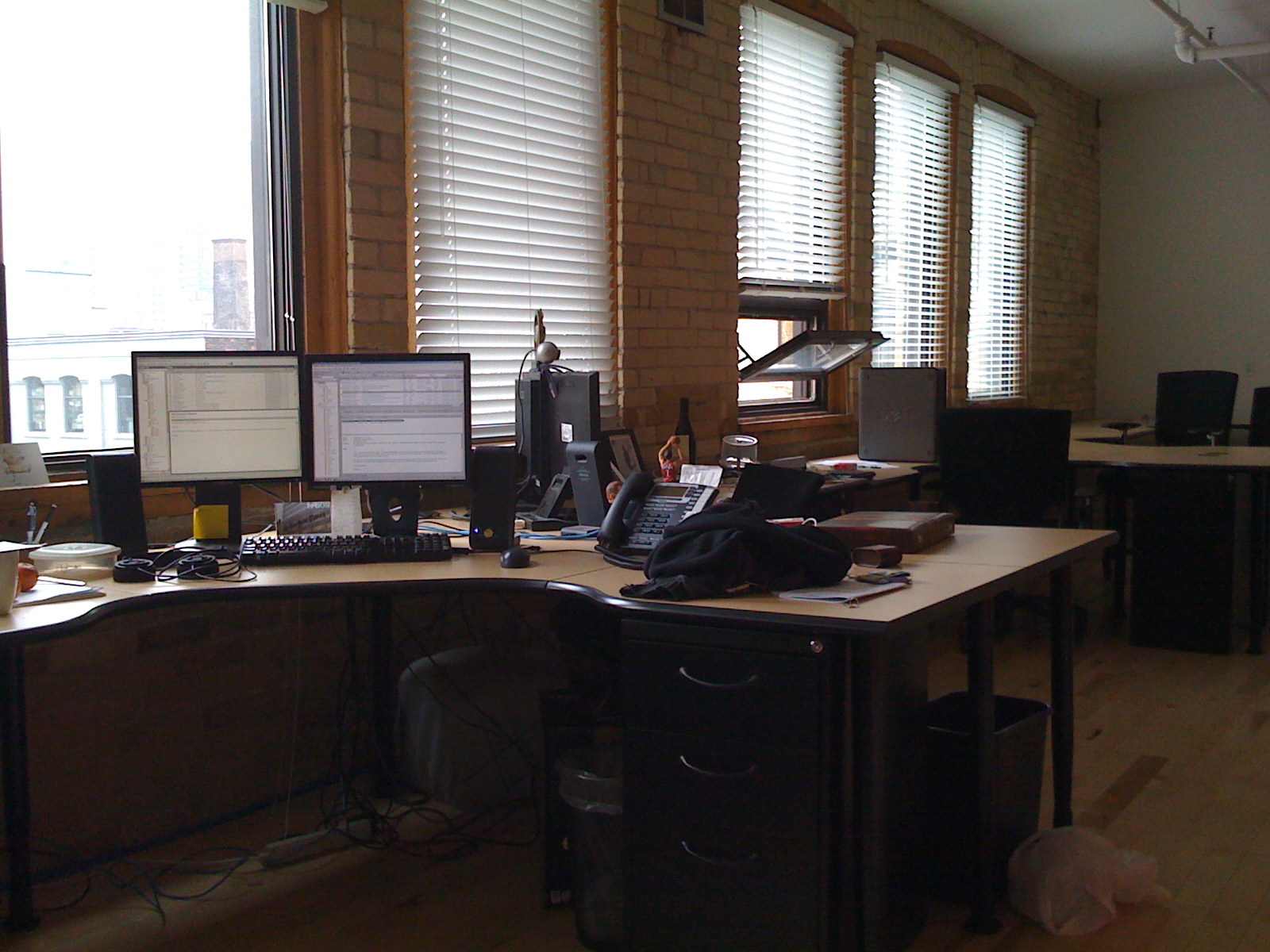 The new office is fine. Did I mention they moved me to a new office? Well they did, it's on the floor beneath the main one, seats 8, has its own kitchen, bathroom and boardroom. There are now 3 of us in there now, not sure when we'll get more. You would think it would be quiet but actually in a much smaller space you hear your deskmates all the more. Eh, it's a change that I mind not much either way. I do get a nice view of the CN Tower, so I have my own LED light show when it gets dark.
at March 03, 2009 No comments: